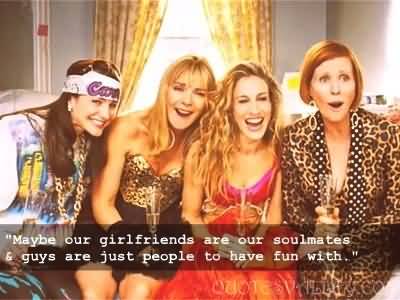 Not like I’m conceited or anything, it just took me a long time to get comfortable with myself, so I own it. It’s not even like I’ve got a Regina George Complex (…so you agree. You think you’re really pretty.)…it’s more about just knowing that I’m a package deal. I’m pretty and smart. What can I say?

I mean, personally, it’s not a huge deal that that I think I’m really pretty. I’m far more proud of the fact that I’m driven and pretty freaking smart. Real talk: I’m damn good at my job and I know it. Decide what you’d like about me, but I think that’s my best attribute.

That being said, I really don’t have much time for boys. By nature, I’m a serial monogamist, so if I’m with someone, I’m usually in a serious relationship. Dating doesn’t compute and even having a boyfriend can suck because it’s just a lot of effort…especially if they resent you for already being more successful than they are. Boys and their egos, you know?

But the thing is, I love meeting people. So as a (very) single twenty-something, when I do find myself with a few minutes to spare, I occasionally find myself trolling apps like Hinge.

The whole dating thing is pretty much one extreme or the other, in my opinion. I decide if someone is worth my time in a few sentences. The trouble I’ve run into, however, is less because of the initial texting and more because I’m probably the most frustrating person to meet up with.

PSA: I’m sorry to all the boys who have tried to get a date with me.

But all jokes aside, I’m pretty damn annoying. I’d say I can’t help that my schedule is crazy, but I probably could if I really wanted to. It’s just that I will always put my work first. And right now, I’m working a “9-5” job, and then I go home and work some more. The joys of building a freelance empire, right? I just don’t have that whole work-life balance figured out. I usually end up taking one or two nights off…but it depends on my mood if I’m willing to spend my evening with some boy or with my dog. Needless to say, I’ve flaked on a bunch of boys. They just take up too much energy sometimes.

But every once in a while, you can catch me in an outgoing-to-decompress mood, and I’ll grace some (probably unworthy) boy with my presence. I mean, at least it makes for an interesting story.

And the percentage of boys who make it to a second (or God forbid, a third!) date…is pretty damn low. I don’t like numbers though, so I’d rather not figure that out.

The truth is, I’ve never been concerned with finding The One. The guys I’ve been in long-term relationships with have really just been lucky or spontaneous. I feel like so many girls my age are concerned about when they’re getting married and having babies…but I’ve never really had a desire to go looking for love. I’m married to my career and I’m forming my own future. I see my dates just as people I want to get to know. They’re more like accessories than anything else.

I think it was Charlotte from Sex and the City who said it best:

Maybe our girlfriends are our soulmates & guys are just people to have fun with!

And while Charlotte may be the complete opposite of me, she’s got a good point. I have a handful of absolutely amazing friends…and they’re the ones I can tell my secrets and goals to. More importantly, they’re the ones I get to laugh about my bad dates with! Boys, they come and go. But my besties are family and I know they’re not goin’ anywhere.

It’s not a secret that I don’t plan on getting married. I have more important things on my mind. I’ve had countless shocked people tell me I’ll change my mind in a few years, and while I’m in full acceptance of that (since it is my prerogative as a woman to change my mind), I’m also as stubborn as a mule. I don’t know that I’ll have a change of heart. Honestly, being married to myself seems like a lot more reliable and being married to my career sounds a hell of a lot more rewarding.