I got into kind of a bizarre discussion recently with a new friend. I’m not entirely sure how it was brought up, but he asked if I was a “feminist.” If you’ve seen my Instagram profile, you’ll notice that it’s listed as one of my keywords; however, I hesitated before answering because that’s really all it is. A keyword.

The truth is, I don’t really know that I fully identify as what we call a “feminist.” I use it as a broad description because a term that I do identify with is #bossbabe. I hate so many of the current and historical connotations of feminism, though, so I don’t really describe myself as such in reality.

In its simplest form, feminism is defined as advocacy of women’s equality to men. It’s almost as though it has to be radical. Extreme. But like so many ideals, I find it to be far more complicated than that. I (especially as a female) am more complicated than that. Yet, the internet is packed with blogs and memes surrounding female empowerment and even as a woman, I still find so much of it to be backwards.

I feel like I’m somewhere between a bra-burning feminist and Taylor Swift.

I mean…I’m strong. Independent. Smart. I have no desire to ever have to rely on a man or husband for anything. I believe that I should be paid just as much as a man doing my job, with the same experience level as me. But I also don’t think I should be paid the same 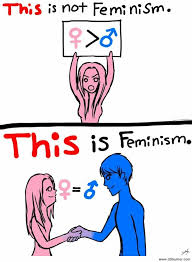 amount or more just because I’m a woman.

On the other hand, I have a Taylor Swift-like history of picking terrible mates and
struggling to find my way after the storm. I’ll be the first to admit that I’m pretty jaded. Even naive sometimes. And you know what else? I’m convinced that the rise of modern-day feminism is giving men an excuse to lay off the chivalry. I’m not talking about paying for dinner. I’m talking about treating a woman like a lady.

We can’t always be strong boss @$$ betches. And there’s no way I’m burning any of my Victoria’s Secret bras. Thank God (most) women are over that now.

But really…why can’t we all just get along?